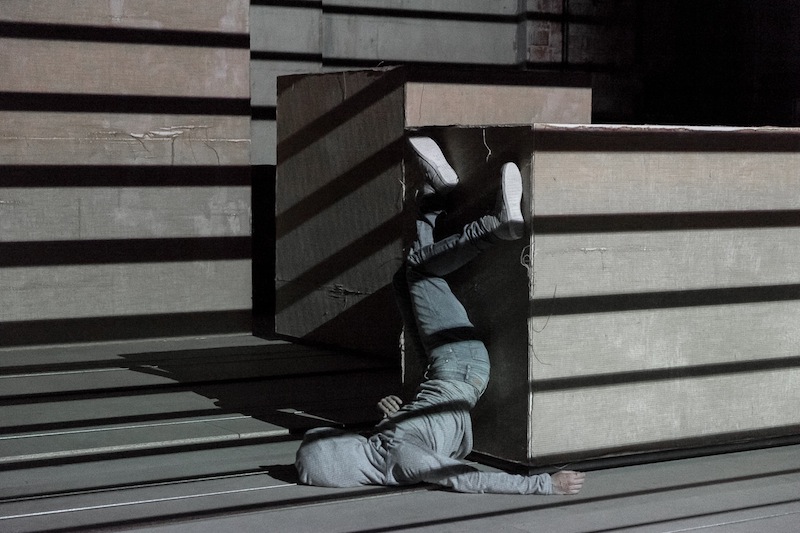 Goethe-Institut Pakistan in cooperation mit der National Academy for Performing Arts (NAPA) brings German choreographer and director Anna Konjetzky and her team to Pakistan for the first time. Her solo dance performance “chipping” will be shown during the NAPA International Theatre and Music Festival.

The festival in March 2016 will run from 20th of March to 3rd of April and will feature 11 shows. There will be seven international theatre and music shows and four performances from Pakistan. This is currently the only International Theatre and Music festival in Pakistan and it plays a very significant role in the development of theatre and music in Pakistan by being staged at NAPA and being accessible to the theatre and music students, graduates and theatre and music artists in Karachi. The countries featured in this year’s festival are Austria, Germany, India, America and of course Pakistan. The plays from Pakistan will include a tribute to Intizar Hussain directed by Zia Mohyeddin as well as a tribute to Kamal Ahmed Rizvi directed by Khalid Ahmed. A third will be an experimental creative performance by a series of performance artists curated by Hajra Haider.

Everything vibrates: The stage in Anna Konjetzky’s chipping is constantly in motion: cubes are moving- sometimes very slowly and hardly noticeable, sometimes faster and seemingly running everything down, changing images and shapes flood the space, breaking it, making it wide or flat. In the middle of it: the body of a dancer that needs to assert itself against, and with, the space; that needs to adjust to constantly new circumstances and that needs to find new ways around.
The body must adjust to new situations constantly, finding its way through the oscillating space: each step is a new balancing act; every movement newly devised; newly counterbalanced; and each way newly found. Even the passive body cannot rest on this stage: the moving space encroaches, deforms and swallows it. The body is driven restlessly to exhaustion and beyond.  “In my opinion, restlessness is a very exiting aspect for the research of the body and movements. Yet, also the society seems to become faster and faster. Inundated by information, always reachable and available, seemingly limitless self-determination and the dictum of being permanently productive are a societal space that constantly forces—or enables—us to do certain “steps.“ (Anna Konjetzky)

Anna Konjetzky
Since 2005 Anna Konjetzky has been creating dance-pieces and dance-installations, where the questioning and organization of the space is always very central. Her work has been shown at Spielart, Dance, Tanzwerkstatt Munich, Unidram Potsdam, Tanztage Regensburg, Festival Danse Balsa Marni Bruxelles, in Ramallah, Kampala, Nairobi, Hanoi, Istanbul, Gent, Salzburg and other places. Her dance-installation `Abdrücke` was invited in 2012 to the Tanzplattform Germany.
At the moment she works as artist-in-residence in the Muffathalle Munich and receives a 3 years support of the city of Munich. She has studied at the physical theater school “Lassaad” (Methode J. Lecoq) in Brussels as well as contemporary dance and bodyweather in Brussels and Berlin. From 2005 to 2008 she worked as the assistant of the choreographer Wanda Golonka at schauspielfrankfurt. She received several prizes and scholarships from Munich and Berlin.

“Choreographer Anna Konjetzky has uncompromisingly pursued her path of artistic research for several years. With insatiable curiosity she explores spatial arrangements, performance areas and the complex interaction of body, space and how they are perceived. Central to her work is her active input of sensory information into a space, to the effect that she abandons the classical stage area in favor of installation spaces or peep-show formats, offering views from all sides or only through gaps in a wall, such as in her latest works “Abdrücke” and “Fern”.

She intervenes in the performance with works on film and video, thereby opening up new prospects and throwing a different light on the body, showing it outside of the performance context or homing in on it in close-ups. In terms of content, Konjetzky’s work draws on the expressive force and narration provided by physical states. With her performers, she seeks the answers which the body gives in altered situations and states. The movements that then arise can be imperceptibly small – an inner and outer trembling, like in “dann still”; a flowing, virtuoso up-and-down, like in “Die Summe aller Öffnungen”; standing still or distorting the body. The body and its identity as a store of experiences form the heartbeat to Konjetzky’s pieces.

By consistently developing her own medium and her own means of expression, Konjetzky creates work which converges with fine art. In “Abdrücke”, for example, dance, video and illustration generate a source of friction between the geometric, anonymous space and the soft and malleable intimacy of the body. A dancer is confined in a mirrored glass box, trying to gauge her situation by moving within the space and doing drawings. The spectator sees into the mirrored cube, where a complex space of perception and experience is unfolded.” (Susanne Traub).

Images all under the copyright of Anna Konjetzky