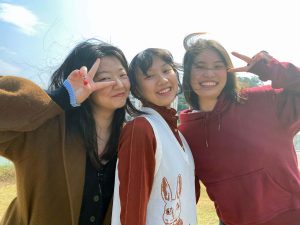 This website is a platform for media research on and in Asia. We regularly inform you about upcoming events: festivals, conferences, and about new research. We produce our own content, too: interviews with media professionals, musicians, artists, scholars. And we are open to, and invite, all content that explores media within the Asian context.

Like everything, this site has a history. It started as an extracurricular student project at Habib University, the first liberal arts university of Pakistan, in 2015. (In case you’re wondering: That’s where our user name ‘Pak Two’ comes from.) The first Editor-in-Chief was Saima Jawed. Four years ago, Arqam Khan took over. Both remain key editorial members to this day, and we would like to thank them for their outstanding work! 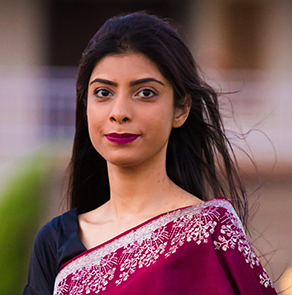 The many early contributions show how important the Pakistani context was for this page – you find interviews with artists like Sanki King, Sheherezade Junejo or Suleman Khilji, with German photographers visiting the country (Andy Spyra, Wolfgang Burat or Manolo Ty – the Germans seem to like Pakistan a lot!). Most of all, Saima and Arqam featured the rich Pakistani poetry scene. They had a famous guy like Afzal Ahmed Syed reciting Faiz – and they talked to young talents like Shameneh Majid or Zoha Jabbar who use the medium of spoken word to draw attention to the oppression of women and minorities in the country – brave, witty, courageous, but above all highly innovative.

With the handover of Arqam and her team to us, students of UIC Zhuhai, China will naturally move a bit more into focus – especially the often very one-sided reporting in the Western media. This has been done before, see for instance Arqam’s and Aymen’s interviews with Markus Heidingsfelder about the ‘lab leak thesis’ (the claim that Covid-19 escaped from the lab in Wuhan), or the interview with British China expert Kerry Brown, which we would like to recommend to everyone as a prime example of calm, fair reflection on China. When asked where all the aggressive reporting on China comes from, his answer summed it up quite nicely:

I think it is more because China is now getting richer, and the US, Europe and others – what we can broadly call the West – is not. This is different to the post-1989 situation. Then China remained relatively backward and marginal. Now it is the world’s second biggest economy and a far greater geopolitical actor. It stands poised to become the world’s largest economy in gross terms some time in the next decade … China is the ultimate ‘inconvenient’ fact – a place that resolutely sticks to its political system, and which adds to the effrontery of this by also making that system seem to deliver outcomes which are competitive with capitalist systems in terms of delivering growth, etc. I think that drives some of the resentment that is felt towards China.

The focus on China and the media’s relationship with it will therefore become somewhat more important here than it already was. But with this we only react to the fact that the conflict between the new, rising superpower and the old fading superpower USA, which is desperately defending its position, is dominating the global media discourse right now – and probably will for many more years to come. Because China’s advancement into the world economy is not simply an economic matter – it is also a political one, as it is fundamentally changing global power structures. We hope that it will also be a cultural one! But to be clear: We don’t see ourselves so much as Chinese, but more as citizens of the world, in the sense of Zhao Tingyang’s tianxia model – because only when we, as the song by USA for Africa so cornily says, “come together as one”, can we solve the many pressing problems that we are currently facing.

This is helped not least by the many scientists we interview here or ask for guest contributions – network theorists like Emily Erikson, systems theorists like Peter Fuchs, sinologists like Kerry Brown  or Hans-Georg Moeller or Karl-Heinz Pohl. Unlike journalists employed by media companies, which need to earn revenue, these people are committed to one thing only: the truth. Interviews with Asian artists, who are either not known at all or not well enough in the West, should also contribute to this.

Education plays an important role in this process. We agree with French philosopher Michel Serres that “the university must come out of the university and into the network”. We recently continued the series of “virtual classrooms” started by Arqam – first with Ben Falk, then with Bernhard Zand. We are currently talking to the new China correspondent of Der Spiegel, Georg Fahrion, with whom we hope to produce a new episode soon.  And those who learn here are not only us, not only students – but everyone, including the teachers. Greta von Thunberg has beautifully demonstrated that young people can initiate learning processes. Perhaps it is not even too far-fetched to say: Young people in particular can do this! Change in the world usually came from young people questioning the old ways. As Chinese, however, we are also aware of the need not to simply throw old knowledge overboard. In the words of Confucius: thinking without learning is dangerous.

Last but not least, we want to thank Mark Lent for taking the beautiful portrait photo of the three of us you see above. Mark is not only a terrific guy, he has not only worked for many major media houses – including the New York Times – as their in-house photographer, he is also a good example of someone who is at home in these two worlds: one in the USA – and the other in China, which has become his new home. 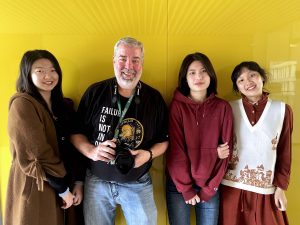